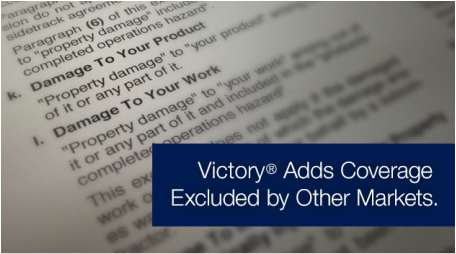 Contractors Faulty Workmanship Coverage is a unique endorsement offered in our Victory® Admitted and Non-Admitted Contractor General Liability programs. It provides a $10,000 limit to protect your clients against claims arising out of faulty workmanship, materials or products. These claims would otherwise be excluded by exclusions, J (Damage To Property), K (Damage To Your Product) and L (Damage To Your Work), found in other contractor general liability policies. Obtain coverage for such claims by placing your clients in our Victory® Admitted and Non-Admitted programs.

• 92215 Driveway, Parking Area or Sidewalk
A driveway/sidewalk paving contractor was hired to cover a parking lot with asphalt. Two months after the installation of the parking lot, the client alleged that the original installation was not sticking, and it appeared that the surface was crumbling. The unsatisfied client filed a claim. Although the claim would have been denied under the ISO general liability "business risk" exclusion, the insured had the Faulty Workmanship endorsement as part of his policy. The endorsement provided $10,000 for the claim.
• 94569 Floor Covering Installation
A floor covering and tile/stone installation contractor was hired to install carpet in a residence. A claim was filed alleging the carpet installation was poorly done. The customer claimed there were multiple seam issues, the Berber was not lined up, and the carpet frayed at all transitions. The insured was billed and paid $2,247.11 for the removal and replacement of the carpet. Because the contractor's Victory® policy had the Faulty Workmanship endorsement, the carrier reimbursed the insured.
• 92478 Electrical - Within Buildings
Keith, a licensed electrical contractor, was hired to install security cameras. The cameras were installed incorrectly. Water got into the cameras causing damage. The contractors’ Faulty Workmanship endorsement paid $10,000 for the damages caused by the faulty installation. If the contractor did not have the Faulty Workmanship endorsement, he would have been responsible for the entire $10,000 in damages.